Teenage Crisis Intervention–What Is It and When Is It Needed?

A useful metaphor for crisis intervention would be the use of stop sticks by law enforcement to halt a speeding vehicle. The person driving that vehicle is behaving irrationally and poses a danger to themselves and others. Unless the police intervene,  the individual will likely hurt themselves, hurt others, or both.

Real-world scenarios where a teenage crisis intervention would be essential for teens involved in self-destructive behaviors typically include one or more of the following:

In most cases, a teen crisis doesn’t just erupt full-blown overnight. A crisis often takes months or years to become life-threatening and dangerous to the teen and their family.

Professional interventionists are trained to quickly identify the factors fueling the crisis and respond appropriately to these factors.

They also have the clinical knowledge necessary to understand the emotional and mental processes that characterize the teenage years and adolescent cognitive development.

Signs Indicating a Teen May Need a Crisis Intervention

Just because a teenager comes home from a party drunk or high doesn’t necessarily mean an intervention is needed. However, a gradual and complete reversal of a teen’s behaviors and routines that involves self-destructive behaviors is a definite sign that a teen is in crisis and needs immediate professional help.

Parents should consider finding out about crisis intervention programs if their teen:

At the core of a teen in crisis are serious mental health issues that require intensive counseling, long-term therapy, and, in some cases, medication to help the teen respond to therapy.

In addition, suicide prevention is just one of the many goals of professional interventionists. Most teens in crisis are depressed, despondent, and feel like they cannot live with their psychological pain anymore.

Adolescent crisis interventionists expertly guide teens through a process that involves defusing and deconstructing the problems that caused the teen to mentally and emotionally break down. Interventionists remain by the teen’s side until they think the teen does not pose an immediate threat to himself or others.

Techniques applied during the intervention process include:

The man who invented this intervention technique was a recovering alcoholic who believed addicted teens and adults could not seek help independently due to being deep in denial. 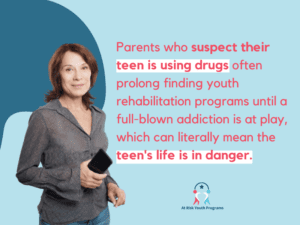 While the outcome of a Johnson Model intervention is often unpredictable, many teens with substance abuse disorders need their denial challenged by this kind of assertive intervention.

The Johnson Model is also the best teenage crisis intervention technique to use for drug-addicted teens with family members who enable their addiction. If an interventionist recognizes an enabler in the teen’s family, they will also confront the enabler about their behaviors.

Most teens in crisis are depressed, despondent, and feel like they cannot live with their psychological pain anymore.

Professional interventionists use this model to help teens with mental illness, suicide ideations, or behavioral disorders.  Less confrontational than the Johnson Model, the Systemic Intervention Model (SIM) involves a therapist, the interventionist, and the family meeting to discuss the teen’s mental and emotional state before a crisis occurs. SIM is often used for suicide prevention or when teens engage in self-harming behaviors.

The interventionist and the therapist counsel the family about how to calmly convince the teen to get treatment. Instead of being “denial” focused, this type of intervention is solution-focused.

Parents of teens in crises learn how to interact with their child in a way that encourages the teen to understand and accept the need for them to enter a treatment program.

Surprise Intervention and Removal from the Home

Teens with conduct disorder, oppositional defiant disorder, or intermittent explosive disorder may need what is called a “surprise” intervention where interventionists arrive unannounced in the middle of the night.

After waking the teen and briefly telling the teen what is happening, the interventionists first ask the teen to voluntarily go to a treatment center.

If the teen refuses, the interventionists will “extract” the teen from the residence.

This type of surprise and removal intervention is sometimes necessary for teens with a violent history towards their parents and siblings. In most cases, teens comply with an intervention transport service.

According to the Association of Intervention Specialists, most interventionists say their success rate for teens and adults ranges between 80 and 90 percent. Those who do not initially accept treatment usually return within several days to accept treatment.

If your teen is suffering from an addiction, mental illness, or behavioral disorder and needs crisis intervention, call today to receive information about getting immediate help. Speak to an expert about What Parents Can Expect During a Teen Crisis Intervention and how it may help your child.

Connect with an Admissions Counselor who specializes in What Parents Can Expect During a Teen Crisis Intervention to help your teen begin their recovery today.